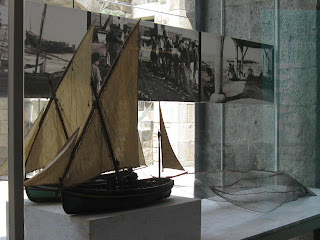 . . . when two llaguts (skiffs is a rough English translation) sailed parallel
dragging a purse net between them. 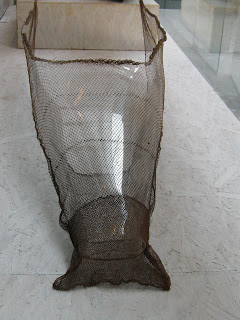 The boats worked the Catalan coast,
explained the exhibit,
as the farmers worked the land; thus
Dragnet Boats were also called Ox Boats.
The season ran September through March with the crews at sea two to three days at a time, according to the description below the model displayed at the Maritime Museum at the Barcelona Port. There could be several daily catches.

Centuries ago the process was criticized for its effect on marine life preservation. The seining would "drag up all kind of fish and other animals without discrimination scraping over the sea bottom."

Also displayed was a Trawler and Lamp Boat. The exhibit said the use of artificial light to fish is "very ancient." The use of torches was recorded as early as the Middle Ages in Catalonia. 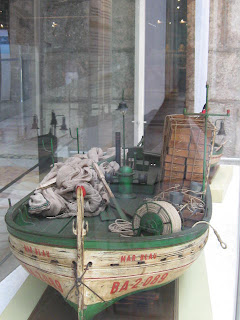 A model of a Mediterranean trawler from the Catalonia coast. The lamps on the trailing Lamp Boat are almost more obvious in reflection off the glass case.

The exhibit marvels at the unusualness of a technique employed along the Catalonia shore originated in the New World. "Purse seine netting by trawlers is a fishing technique imported from the American coast" with its first recorded in use around 1825 in Rhode Island.