Merging Regs and the Zen of Boat-building 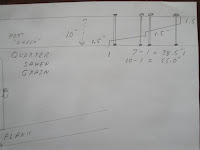 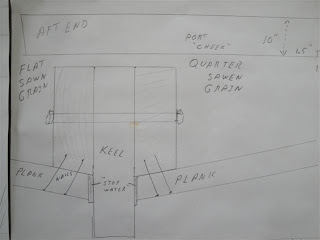 Francis Goddard is 78 years old. "Seventy-eight-and-a-half," he brags. He climbs a tall ladder up high sides then scuttles back down onto the floor of the hull of the first skipjack he built. He wields a small chain saw. He built the Dee and appears to recall how she went together splinter by splinter. He shows little compunction at sawing out her guts and rebuilding her. He would do it better just by the fact that he had done it once before. 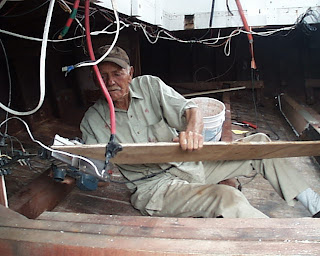 Of building a boat Francis says, "Once I dream it, I can build it."

Ben Goddard, more than a decade younger, is a cousin once removed, or a second cousin, but more importantly another respected Goddard boat builder of Piney Point.
Piney Point, until the 1980s, was primarily a fishing village and settled in the horizontal traditions of cousins and clans rather than the more vertical father to son set ups. The sweeps of various European cultures across America had clannish, horizontal systems forming the Appalachians, more Scottish than British. And bits of this fell throughout St. Mary's.
Good thing. Ben isn't one for dreaming but for the practicality of the minimal disruption to reach the maximum goal. Where Francis wields a chain saw, Ben will hone a piece of wood into its cradle. And cousins respect cousins. And the same with boat builders.

In the photo above of Francis he is creating a template. In the photo below of Ben he is sawing and planing the new right cheek of the keel. 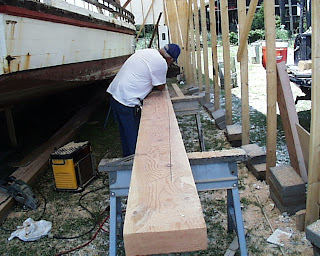 The collaboration has worked well. The captain remains calm and pleased. Phew.

In the video posted http://justbeforeitsgone.blogspot.com/2010/06/chiseling-out-center-keel.html Jack shows where the center keel and its starboard (right) cheek have been removed. The Coast Guard visited later that week and met with Jack, Francis, Ben and Surveyor Michael Previti. The determination was to also replace the left cheek as well. This was the concurrence of the Coast Guard, Shipwrights, Surveyor and Captain.

This final third of the boat's spine can't be removed until both the new center keel and right cheek, which makes sense to me. 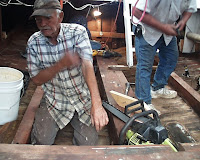 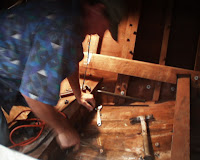 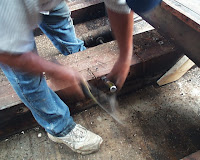 Work on the center and starboard cheek continues.


All these photos were shot by Jackie. Thanks, babe!
Posted by Viki Volk at 9:59 AM No comments:

It's Been A Long Time

It has been a long time since I've blogged. Since BP's Big Poop I just haven't been laughing very much. But I did go to the beach where I park my pop-up in a state park on the ocean. I try to go every year. This year I wanted to beat the oil. That's how I see it. I wasn't alone on the beach to see it that way. It's like a throwback to before the 60s. We know the end is near and we're determined to see it through with good times. It's what we have left now that it's too late to leave a beautiful corpse.

So the beach was nice. Some great girlfriend laughs -- daughter laughs -- even a nice husband weekend -- just nothing really funny to write home about as the ocean lapped and you kept looking for balls of oil.

Then I get home and my girlfriend Babs -- that isn't her real name but a lot of people will know who she is anyway, which serves my purpose -- has e-mailed "2 great iPhotos." One from the good-time crab feast on the beach inside the big mosquito and shade tent that stayed up THE ENTIRE WEEK for the first time ever because IT WAS A PERFECT WEEK at the beach UNTIL I GOT SAW THIS OTHER "GREAT" iPHOTO where my mother's thighs had been Photo-shopped onto my knees.

No kidding. I'd recognize those thighs anywhere. They were my mother's.

Looking out from behind the long-skirted Women's-Sized swimsuit I wear to the beach puts me out of view of my thighs. That's fine. Back when I was in the habit of looking at them, say about 30 years ago, I pretty much memorized them and hold that picture still. Held that picture. I'm currently working on recapture.

As a Baby Boomer I believe in Walt Disney and the Wizard of Oz who successfully convinced me that what we believe is true, is. You can have it all. I don't think I was alone in taking this to heart. How else do you explain the McMansions, second homes, big cars, four cars, big boats and ski trips and all for a series of minimum payments made irregularly for as long as you own your life.

There is a Faustian ring to all of this, but somehow I fail to make the direct connection, and so I don't. It doesn't really matter. Just dropping the name counts for Baby Boomers.

My generation was graded on the curve. This means you don't actually have to do Good or Excellent to get a B or an A -- you just have to to better than others do.

This could go a long way toward explaining the Big Poop and a lot of other ridiculous events taking place on the Baby Boomer's watch.

Then, Boom! Unexpected and unimaginable consequences. Your mother's thighs and the Devil to pay. Too little exercise, too many mortgages, too late to leave a beautiful corpse. Poop leaking out of the bottom of the ocean and dang if that doesn't float to the surface as well.

You see where I'm going with this, right? Out of sight, out of mind. Magic thinking. A generation (or two or three or so on and so on) graded on the curve.
It's not going to get better. I mean, I still believe I can create truth out of nothing. I was weaned on fiction. I made my reservation for next year on the beach. I accept leaving in a whimper not a bang. I am still capable of living fully in the present, the Disney moment, where truth is fully of my own consciousness' creation. I am a Baby Boomer!

Indeed, my epiphany upon seeing my mother's thighs stuck onto a woman who, actually, now that I check back, doesn't look much like me at all, was not about BP or global ecological disaster. It was much more positive.

I thought of the foresightedness of the Midwestern reunion planners scheduling our 40th in the fall. At that time of year weather permits three-quarter length shirts and pedal pushers.

I even had time to remind myself -- before I went on to think about BP and oil blobs and entire global catastrophe -- that these three-quarter length pants are called something else now and that I have to be sure and get that from my 20-year-old before I pack.

Just to catch everybody up.

1. There is a skipjack in my backyard. 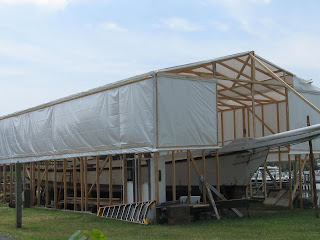 This is because a long long time ago I married her owner. Catch the pronouns.

2. He doesn't look exactly like this anymore. But there are times he can still pull it off.

3. A skipjack is a Big Deal in the rarefied air of Chesapeake Bay Preservationists. A Really Big Deal. And a skipjack is astronomically, insanely and not to any definite economic end point -- Expensive. Really expensive.

4. So a foundation was created.


(no endorsement of any other YouTube videos are made .... blogger.com just has issues with direct uploads .... this is just a disclaimer) 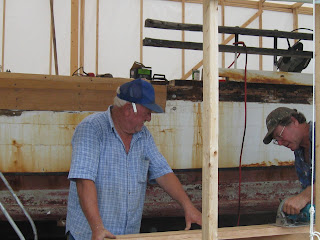 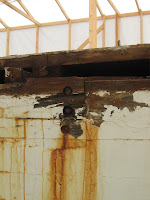 It started out as simply a good idea to replace the dredge chocks, as long as first class shipwrights were on-site and something as extreme as a keel was being replaced. And of course railing. It is always a good idea to update railing. That led to some decking. Then some more decking. Then the decking around the fore cabin. Then the hull.
By the time the U.S. Coast Guard arrived last week for inspection and endorsement there were holes in the skipjack where a captain never wants to see holes.

But it started so simply, with the chocks:

And that led to this: 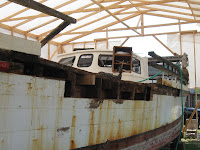 The starboard side doesn't look much different.

Hull replacement work is limited to primarily these planks at the bow, seen below from port 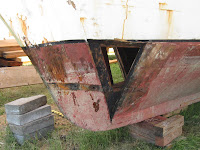 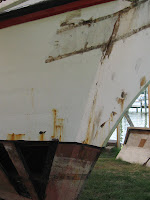 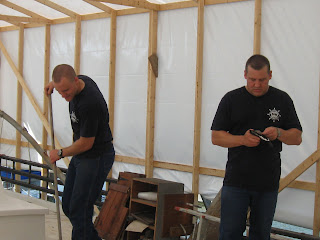 Among the volunteers working to keep the vessel readied for the next day's shipwrights are Dave Cronce of Bainbridge, Pa. and Matthew Clements of Roanoke, Va. Both men are from the Harry Lundeberg School of Seamanship at the Paul Hall Center of the Seafarer's International Union -- a generous and long-term supporter of the Chesapeake Bay Field Lab, Inc., the 501(c)3 that owns and operates the Dee of St. Mary's.

Visit www.thebaylab.org to learn more about educational programing and tours.
Posted by Viki Volk at 12:56 PM No comments:

Chiseling Out the Center Keel

The heart of the problem with the skipjack the Dee of St. Mary's was diagnosed last fall as rotten wood in her keel. Fresh water is what rots wood. Salt water preserves.

The extent of the rot in the keel was uncovered last week.

The inboard portion of the keel -- in the stern -- consists of a laminate of three chunky three-inch by ten-inch boards. The laminated keel runs from the stern forward about 12 feet to midship. From that point forward the Dee's keel becomes a single piece of 12 by 12 fir shipwright Francis Goddard had shipped from Oregon.

The laminate is described in the video piece by piece -- the center keel, right (or starboard) cheek and left (port) cheek. A substantial length of the right cheek had to be removed and a portion of the center keel as well.

The rot does not extend into the left cheek or below the hull planking. Nor is there any rot in the lower keel, the portion extending beyond the bottom of the boat or in the skag, the sternward extension of the keel for the mounting of the rudder.

Rotten wood found elsewhere is also being removed including segments of the deck, some hull planks and the entire forward cabin.

Shipwrights start arriving at 7 a.m. with the intent to remove all bad wood and permit the fullest exposure to U. S. Coast Guard inspectors due for an on-site inspection this week.
Posted by Viki Volk at 5:46 PM No comments: